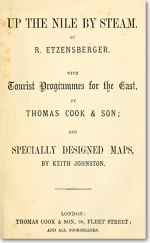 Nothing has probably been so fully described and praised to exhaustion as the famous “Dahabeah;” and the idyllic charms of life in one of these boats, floating up and down the Nile, have been sung in every imaginable strain. No doubt, for a party of very dear friends on a shooting excursion, a young couple in their honeymoon, invalids in search of health, young swells who have nothing at all to do on earth but kill time and throw away their money – in fact, for anyone who can easily shut himself out from all communication with the civilized world, and has got the temper to lie idle for weeks and months, looking every day on the same uniformly desolate scenery, nothing can be more delicious besides, it is “the Fashion.” Who would dare to confess, in good society, to having been up the Nile, except by Dahabeah?

Even the most enthusiastic admirer of this majestic river must confess that the scenery on its banks is very tame, and soon becomes monotonous. On board a fast sailing Steamer there is continual change and every turn brings new features, new sights in view. A Dahabeah, when becalmed, may be detained in the same spot for a whole week; or, if the passengers insist, as they must do if they want to move on, and there is no head wind, the crew will work away and haul the boat upstream – a very painful sight, and really galley work. Look at those poor fellows yoked together with a rope round their breasts, toiling along with outstretched and swollen necks, and listen to their painful song as they work, slowly advancing, by short steps, at the rate of from five to six miles per day! Floating downriver, if contrary winds prevail, Dahabeahs are no better off. Arabs can do nothing without singing most piteously; their songs, which are described fully in every guide book, may amuse you for a whole day, but become, from constant repetition, quite unbearable.

It very frequently happens that a party for a Dahabeah is only made up in Cairo, between people who never knew or met each other before. On starting, it is soon found out that their characters are anything but congenial; one angry word produces another, and after a few days serious quarreling breaks out. If these parties are still within the reach of the Railway (running from Cairo to Roda, 180 miles), they break up and return to Cairo; if beyond, they have to endure each other’s society until the end of the voyage. 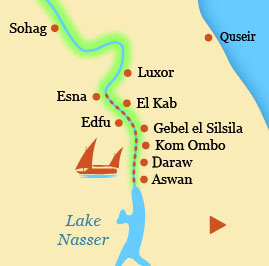 My son and I just completed a trip on the dahabyia Zekrayaat from Aswan to Luxor. What a treat! The staff was friendly…

As for the actual boat trip … a dream. All agreed, the best trip on the Nile one could ever wish for. The crew, captained by Ebeid, ensured one felt ‘at home’ right from the start.

Everything was perfect, beyond all expectation that we had and I cannot think of a single issue or item on which I could have a less than enthusiastic comment.

The essence of this wonderful experience: a luxurious and extremely relaxing adventure with great food, especially the lunches, well-guided, learning full trips on the borders of the Nile, combined with good company, sunny days and a fine wind for sailing.

Being a sailor I appreciated the team work and skills involved bringing this craft to gently rest alongside a rock wall or a mud bank. And all so respectful to us. The food was very, very good and the service tremendous.

We managed to have a truly relaxing trip that was crammed with visits to temples, quarries, markets … a true contradiction. The scenery form the boat was stunning. Children swimming in the Nile, men fishing, women washing their clothes and farmers tending to their animals and fields.

The boat is beautiful and very well maintained. The crew not only knows how to operate this perfect and efficiently, but they bring life and personality to the boat with their attitudes and constant smiles.